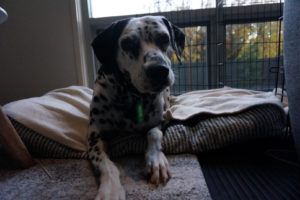 How could you say no to that face?

Ladies and gentlemen, we would like to introduce Ruby, a spritely older Dalmatian with a lot of love to give.

Ruby is a very people oriented dog, who loves to hang around with her owners. She is interested in whatever is going on around the home, and is happy to play with toys provided her people are too.

Ruby is a food oriented lady, who knows her name very well. She understands basic commands, and is learning manners such as waiting patiently for her food, sitting at the front door instead of barging through, and not entering the kitchen (which she has figured out), or jump on the couch (which she selectively chooses to ignore). She is house trained, and does her best to hold on until she is outside, but she does not indicate when she needs to go, would suit a home where she can access outside, or at least be let out regularly. 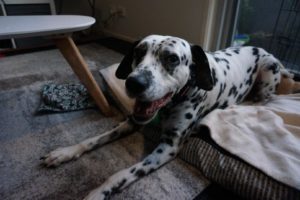 Ruby has bouts of energy (especially her morning zoomies) and is happily going on 2-3 half hour walks a day at a moderate pace. Being an older lady however, she also loves to nap, she knows that her bed is hers, and has responded very well to her crate (provided the bed is in there).

Her health is quite good for a 10 year old, She is a little stiff in the cold mornings and after long naps (aren’t we all). She also has some “old lady lumps”, though these have been checked and seem benign. 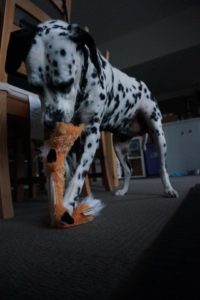 So much for fox and the hound!

Ruby would suit a quieter home, with people who are semi-active, but also not looking for a high energy dog. She does like company and gets a bit sooky when people aren’t about, so would ideally be somewhere where people are around often.  She is very placid with people, and puts up with my annoying rubs and hugs, and would probably be okay with older children.

Ruby came from a home with another Dalmatian, however she was the runt of the litter, and was bullied by her siblings. She is cautious and defensive around other dogs, tending to avoid them as a first instance. She needs slow introductions and can be a bit grumbly and snappy with forward/playful dogs, but we have had some success walking her with friend’s dogs after some initial grumbles. Thus we think she would probably be more suited to a one dog home. He previous owner mentioned she was ok with cats, but we haven’t tested this. Ruby likes to fancy herself with illusions that she can catch birds (Sky biscuits) but they fly away before she can catch her with death waddle.

We would love to see her go to a great home for her twilight years, but people with the surname “De Ville” need not apply. 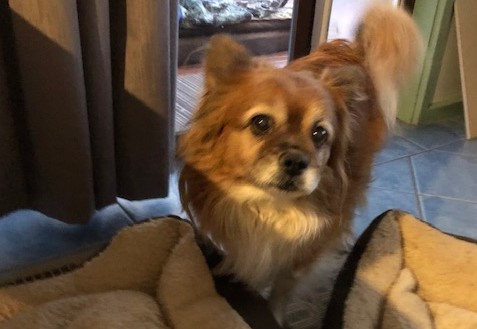 The only job where you start at the top is digging a hole!

Make a difference to a dog's life